Back to page
Edit

Quentin Tarantino is the director and writter of Pulp Fiction 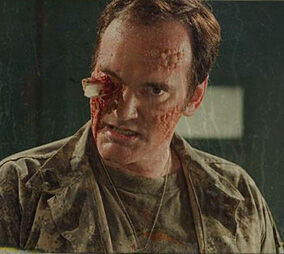 Quentin Tarantino was born on March 27, 1963 in Knoxville, Tennessee, the son of a 16 year old nursing student Connie and a 21 year old law student and aspiring actor Tony. Connie named him after Burt Reynolds' Indian character, "Quint" on the 60s TV series Gunsmoke. When Quentin was 2, they moved to South Los Angeles which is where Quentin grew up. His mother took him to the cinema from an early age, he saw films like Abbott and Costello Meet Frankenstein (which was a major inspiration), The Wild Bunch at age 6, Carnal Knowledge at age 8 and Deliverance at age 9. From these early introductions to cinema, Tarantino fell in love with the movies and went at every opportunity.

At the age of 22, he landed a job at the Manhattan Beach Video Archives, a now defunct video rental store in Manhattan Beach, California where he and fellow movie buffs like Roger Avary spent all day watching, discussing and recommending films to customers. He made his first (unfinished) film in 1986, 'My Best Friend's Birthday', written with acting class friend Craig Hamann, and followed this up by writing his first script, 'True Romance' a year later. During this period, he was attending acting classes and put together a CV of his (non-existent) acting experience which included a role in Jean Luc Godard's 'King Lear' because nobody in Hollywood would have heard of the film or director and Dawn of the Dead by George A. Romero because he resembled a biker in one of the scenes. His role in 'King Lear' was actually listed in Leonard Maltin's video guide. By 1988, Tarantino had written his second script, Natural Born Killers and in 1990 he sold the script for True Romance for $50,000. He decided to use this money to make his third script, Reservoir Dogs on 16mm and in black and white with his friends in the leading roles. It was around this point that Tarantino left the video store to do rewrites for CineTel, a small Hollywood production company - it was at this time he met Lawrence Bender and struck lucky; Bender was attending acting classes with Peter Flood, who was divorced from acting teacher Lily Parker and knew Harvey Keitel from the Actors Studio. Keitel saw the script and was impressed enough to raise some more finance, act in the film and help Tarantino cast the main roles. At this point, producers Monte Hellman and Richard Gladstein also joined the project. In 1991, Tarantino filmed some scenes at Sundance with him playing the role of Mr. White and Steve Buscemi playing Mr. Pink. These scenes were shown to various film people to comment on and the group containing Terry Gilliam were particularly impressed. Reservoir Dogs finally premiered at Sundance '92 before appearing at various film festivals around the World. Miramax picked the film up for distribution after Sundance and it was released in the US later in 1992 and in the UK on January 8 1993. Tarantino traveled around the various festivals in 1992 promoting his film and writing his next script, 'Pulp Fiction' which went on to win the Palme D'Or at Cannes in 1994. It finally opened amidst incredible hype and critical acclaim on October 14 in the US and October 21 in the UK.

Pulp Fiction went on to become one of the most highly acclaimed movies of 1994, grossing over 100 million dollars worldwide and picking up several Academy Award nominations for Best Picture, Best Director, Best Actor, Best Supporting Actor, Actress, Best Editing, and winning an Oscar for Best Original Screenplay. Riding on the success of Pulp Fiction, Tarantino has gone on to be a major Hollywood player, Producing, Distributing films through Miramax with an arm of the company called Rolling Thunder Pictures, Co-Directing and Co-Writing Four Rooms, an anthology-type feature film, Directing an episode of 'ER', a popular TV show, and making many appearances in movies and TV. After having already cooperated with Robert Rodriguez in 'Four Rooms', in 1996 the two of them realized Quentins old script From Dusk Till Dawn. Rodriguez directed. Apart from having written the screenplay he also co-produced and starred as Ritchie Gecko side by side with George Clooney. The movie was a big success and this also leaded to 2 sequels ('Texas Blood Money' and 'The Hangman's Daughter'). In 1996 he also appeared in the movie 'Girl 6', acting himself, Curdled where the 'Gecko Brothers' from 'Dusk' appear he was producing, he made some changes for 'The Rock' and appeared in Steven Spielberg's Director's Chair, a CD-Rom game. Being a fan and friend of the american top-seller author Elmore Leonard, in 1997 he decided to make the movie 'Jackie Brown' based upon Leonard's novel Rum Punch.