In Pulp Fiction, Zed is a security guard and supposedly Maynard's brother. He has a chopper he calls Grace. Butch Coolidge was being chased by crime boss, Marsellus Wallace into a pawn shop where Butch nearly killed him. Suddenly the pawn shop owner Maynard appeared and held Butch at gun point with his shotgun, knocking out Butch while Marsellus slipped into an unconscious state after his fight with Butch. Maynard then phoned in Zed. Later Maynard woke them both up and they found themselves bound and gagged. Zed then arrived and they woke up 'The Gimp.'

Zed chose Marsellus 'randomly' and he and Maynard brought Marsellus to the back room. They bent Marsellus over a vaulting horse in the room and Zed raped Marsellus while Maynard cheered him on. Butch managed to untie himself and knocked The Gimp out. Just as Butch was about to leave the pawn shop he realised that he can't leave Marsellus like this and went back to save him, katana in hand. Butch sneaks up on Maynard and brutally slashed and stabbed him with the sword.

He then holds Zed at bay with the katana. Butch egged Zed on to grab his handgun. Marsellus freed himself and picked up Maynard's shotgun. Before Zed could grab the pistol, Marsellus shot off Zed's genitals with the shotgun. He vowed that Zed's suffering had only begun, promising that he would call his crew in to torture Zed with a pair of pliars and a blowtorch.

Since Butch saved him Marsellus called off his feud with him, provided Butch left Los Angeles forever and swore that he would keep what happened there between the three of them. Afterwards Zed was tortured, mutilated and killed by Marsellus' men. Butch would take Grace (the chopper) as his new getaway vehicle out of the city with his girlfriend Fabienne, telling her that it had belonged to Zed and that "Zed's dead, baby". 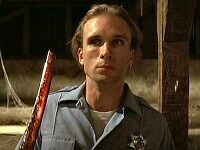